NEWS 221115 about DebEX KDE Plasma – a Refracta Build
I have made a new extra version of DebEX KDE Plasma Live DVD – efi. It’s a pure Debian 12 (Sid/upcoming Bookworm) system. (unstable). I.e.: There are no Ubuntu or Kubuntu elements involved. DebEX KDE Plasma Sid uses the KDE Plasma Desktop 5.26.3 – latest version, released 221108 – as Desktop environment. Kernel 6.0.6-amd64-exton-rt14 is used. All included packages have been updated to the latest version as of 221115. DebEX KDE Build 221115 works in the same way as DebEX KDE Build 220926 – see this INFO. I have kept DebEX Build 220926 since it is based on Debian 11 (stable). In Build 221115 I have added LURE (Linux User REpository). LURE is intended to bring the AUR to all distros. It is currently in an alpha state and may not be stable. It can download a repository, build packages in it using a bash script similar to PKGBUILD, and then install them using your system package manager. Read about how to use LURE…

VirtualBox Guest Additions and VMware Tools are pre-installed, which mean that you can run DebEX KDE in full screen – see the screenshots below.

THE REAL McCoy
DebEX is a pure Debian system. I.e. no traces of Ubuntu, Kubuntu etc. New releases of Ubuntu are always based on Debian and (mostly) Debian Sid/unstable. So is DebEX KDE.

NEWS 221103
A new version of LFS EXTON is ready! The first version is from 210706. Most important news re. the new version:
1. LFS EXTON Build 221103 runs on ALL computers. I. e. new and old ones. UEFI or non-UEFI computers. (Build 210706 was not compatible with some newer computers).
2. Build 221103 uses the latest kernel 6.0.6, released 221029.
The kernel is named 6.0.6-amd64-exton-rt14.
3. I have upgraded some essential packages. Most important Firefox.
4. I have installed two new packages: Gnu Emacs (“At its core is an interpreter for Emacs Lisp, a dialect of the Lisp programming language with extensions to support text editing”) and MPlayer (a movie player).
NOTE about MPlayer: To be able to play videos (and not just hear sound) you’ll have to install AAlib. Very easy to install. Just follow the instructions.
5. You can download the kernel-sources for LFS EXTON from SourceForge.net – linux-source-6.0.zip. Can be used if you want to install (for example) NVIDIA Graphics Drivers. Unpack and place the sources in /usr/src.

LXDE and LightDM
LFS EXTON uses LXDE as Desktop environment. LXDE is designed to be user friendly and slim, while keeping the resource usage low. LFS EXTON has all the tools needed for you to go on and install other Desktop environments or whatever you like (after a hard drive installation of LFS EXTON). 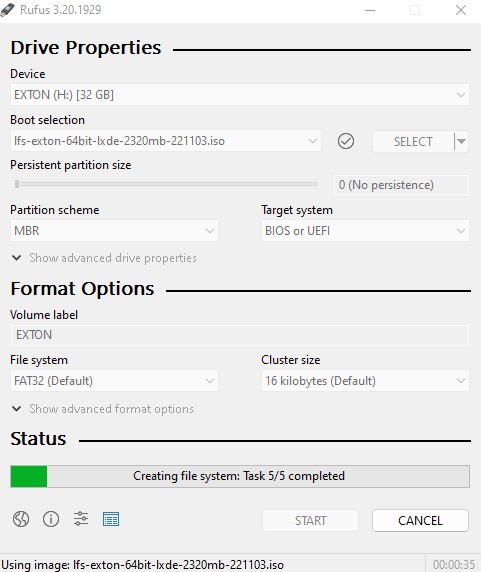 LOGIN to LXDE
Login as root with password root$$ or as the ordinary user lfs with password linux$$. While logged in as lfs you can use Sudo to become root. Example commands: sudo su and sudo pcmanfm. LightDM‘s login screen will look like this. 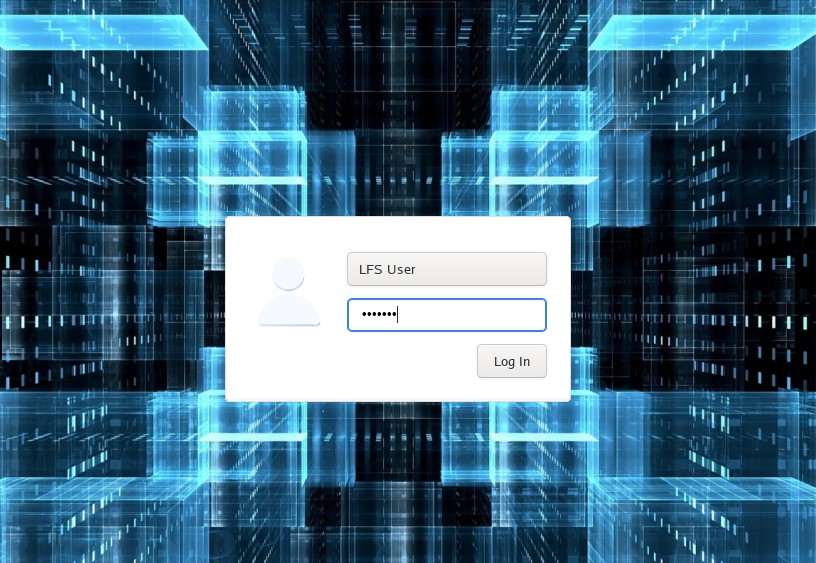 Kernel
LFS EXTON uses my “special” kernel 6.0.3-amd64-exton-rt14. You can of course compile you own LFS kernel if you want.

“Normal” use of the system
You can also use LFS EXTON as any other “normal” Linux system. You can for example run Netflix in Firefox.

Sound in LFS EXTON
You will only have sound when logged in to LXDE as the normal user lfs. Use Pavucontrol (PulseAudio Volume Control).

Run it fast!
The system is quite fast and responsive. You can run LFS EXTON live super fast from RAM. When the boot process is ready you can eject the DVD or USB stick – screenshot. Use Boot alternative 2 or Advanced options… >> load to RAM. Watch the live boot screen below.) 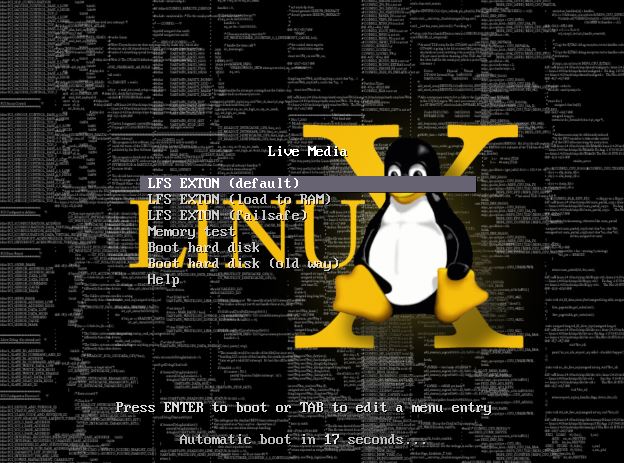 md5sum for the LFS EXTON ISO