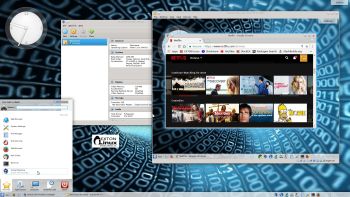 Slackware is the first widely-used Linux system, which is still developing. Slackware has existed since 1993. In comparison with for example Ubuntu and Linux Mint, many people believe that Slackware is “difficult”. Any novice can quickly learn to use Ubuntu they say. My remaster of Slackware Current (14.2), which I call SlackEX 14.2/Current 64 bit Linux Live DVD/USB, is however just as easy to use as Ubuntu and/or Linux Mint. Some tend to complain that the Program Management in Slackware is awkward. That was perhaps earlier the case, but not anymore. Now we have the Application Managers Slackpkg and GSlapt – a GTK version of slapt-get. They are a piece of cake to use! Users of Synaptic will feel at ease with GSlapt.

The end of the road…
I will end my SlackEX project now. It’s not needed anymore (if it ever was). Alienbob’s Slackware systems are built with liveslak scripts. Anyone can use the scripts. No special knowledge of Slackware (or Linux) is needed. A lot of different Slackware systems (built with liveslak) can be downloaded. They can all be installed to hard drive using a script called setup2hd. They can also be transferred to a USB stick using a script called iso2usb.sh.

1. ExTiX – based on Ubuntu
Installation with perfect persistence using the regular installation program Ubiquity. Read about how to do it (under B)).

2. exGENT – based on Gentoo Linux
Installation with perfect persistence using a script, which I call exGENT Installer. It is done in the same way as a hard drive installation. Read more…

3. SlackEX – based on Slackware
SlackEX has to be installed to a USB Stick. Read about how to do it. It can be done i Windows or Linux.

4. CruxEX – based on CRUX
Please read my INSTRUCTION for CruxEX. It can be done i Windows or Linux.

5. EXTON OpSuS – based on openSUSE
EXTON OpSuS has to be installed to a USB stick. It can be done i Windows or Linux. Read about how to do it.

6. ArchEX – based on Arch Linux
Please read my INSTRUCTION. All your system changes will be saved directly on the stick.

CruxEX 3.2 64 bit Linux Live CD/USB is based on CRUX 3.2 (latest version, released 151123), which is all Linux enthusiasts/nerds favorite OS. (CRUX 3.2 is a lightweight Linux distribution for the x86-64 architecture targeted at experienced Linux users). CruxEX 3.2 2016 uses the LXDE Desktop environment. I have replaced the original CRUX kernel with “my” special kernel 4.3.0-x86_64-cruxex, with support for “extra everything”.

Kernel etc
Kernel 4.3.0 is the latest available stable kernel as of 151125. Among all installed and updated applications are Firefox, Gimp and Wicd. Furthermore compilation tools so that you can install programs from source.

NEWS 151125
CruxEX 2016 is distributed both as an ISO file and a Zip file. Install my new version of CruxEX 3.2 64bit from 151125 to a USB Pen Drive and save your system changes – read this INSTRUCTION. If you later on decide you want to install CruxEX to hard drive from the USB Pen Drive all your system changes will also be installed to the hard drive. Or burn the ISO file to a CD and run CruxEX live the “normal” way. Mainly the ISO file is for all of you who like to run and test Linux systems in VirtualBox (before installing the systems to hard drive).

More about CruxEX 3.2 version 151128
All packages have been upgraded to the latest available version (with prt-get sysup). Furthermore: This version uses kernel 4.3.0 released 151102!

See a screenshot of CruxEX’s Desktop

INSTALLATION to hard drive
ArchEX can easily be installed to hard drive of those who so desire. Use ArchEX Installer. I.e. while running ArchEX live from the DVD.

Rolling distribution
Arch Linux/ArchEX are rolling distributions, which implies that once you have installed the system on the hard drive there is no need for re-installations (which otherwise is common in the Linux world).