Exton|Defender SRS is a Linux system available as a Live DVD based on Fedora Rawhide, 64bit. (Rawhide is the development version of Fedora). Exton|Defender is for administrating or repairing your system and data after a crash. Exton|Defender aims to provide an easy way to carry out admin tasks on your computer, such as creating and editing the hard disk partitions. It comes with a lot of Linux software such as system tools and basic tools (editors, Midnight Commander, network tools). Exton|Defender can, however, also be used as a normal Linux Desktop System. It requires no hard drive installation, but can easily be installed to hard drive if you want. Desktop environment: Cinnamon 4.8.6. Since Fedora 34 was released 210427 this version of Exton|Defender can be seen as a “test” release. At first I was thinking of making a remaster of Fedora 34 with Cinnamon. Then I discovered that you can download an “official” Fedora 34 ISO with Cinnamon. You can also download some Rawhide “spins”. No one with the Cinnamon Desktop Environment though (as far as I know).

Installation to a USB stick in Fedora or Ubuntu – with persistence!
Read about how to perform such an installation on the INFO site. IMPORTANT NOTE: Since this Defender Build is based on an unstable version of Fedora I must strongly discourage you from installing Exton|Defender on a computer where you already have other Linux systems (and perhaps Windows installed). You may mess up your current (working) boot loader. So if you want persistence install Exton|Defender to a USB stick the way I describe on the INFO site. It is a much safer alternative!

THE IMPORTANCE OF Exton|Defender being based on upcoming Fedora 35
Programs won’t “crash” or anything like that. And I haven’t noticed any “bugs”. That said you should of course be a bit careful. This version of Exton|Defender is for people who like to use “cutting-edge” software and the latest kernels etc. You will always have the latest Linux/Fedora software installed if you regularly run the command sudo dnf upgrade –refresh. 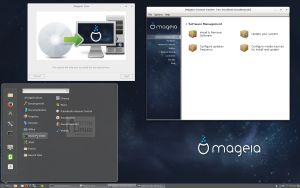 My second version of Exton|Defender is a remaster of Mageia 5, released in June 2015. Mageia has been the third most popular Linux system in the world for some time now (according to Distrowatch.com).

My changes of Mageia 5
I have removed the Gnome Desktop environment and installed Cinnamon instead. Furthermore I have installed the following rescue and repairing tools: NTFS-3g, GParted, PartImage, Sfdisk (util-linux-ng), Rsync, Ddrescue, FSArchiver, TestDisk and Midnight Commander. Other programs (among many others): NetworkManager, Firefox, Gimp, Google Chrome (for Netflix), Emacs, Safecopy, kernel headers and many compilation tools. Study the full list of installed packages. The system language is ENGLISH.

Who is Exton|Defender mga 32 bit Cinnamon for?
Exton|Defender mga aims to provide an easy way to carry out admin tasks on your computer, such as creating and editing the hard disk partitions. There is also no official live Mageia 5 ISO with Cinnamon for downloading. (Only with KDE and Gnome). Exton|Defender can also be useful for people with older 32 bit computers who like to run an eminent Linux system (Mageia) live with some speed.

See this screenshot of the Cinnamon 2.4.5 Desktop in Exton|Defender mga