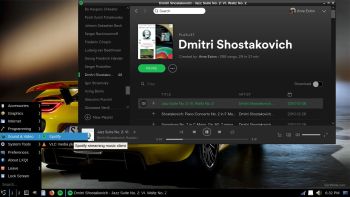 NEWS 20180410 about exGENT (Gentoo) 64 bit
I’ve made a new version of exGENT with only a few necessary packages pre-installed. It uses LXQt as Desktop environment and kernel 4.15.14-aufs-gentoo-exgent. The ISO file is of 1490 MB due to the fact that I’ve included the kernel sources. They are needed for installation of certain software. Despite this exGENT version 180410 runs surprisingly fast from DVD or USB. Even in VirtualBox and VMware. Faster than most other Linux live systems. I call my new version exGENT 2018 LXQt Live DVD. It replaces version 170407 and 170412. Those versions were too old for upgrading. I had to start over and build version 180410 from “scratch”. All installed packages in exGENT have been updated to the latest available version by 180410. Study the full package list.

What’s new in exGENT Build 180410?
The boot loader Grub Legacy has been replaced by Grub2. MOST IMPORTANT: In exGENT versions before 170309 the file system wasn’t writable when running exGENT live (from DVD). Now you can emerge (install) new programs/packages even while running the system from a DVD or USB stick. If you do that and later decide to install exGENT to hard drive all your changes will follow! Furthermore you can install/transfer exGENT to a USB stick with the dd command in Linux or use Etcher and Rufus in Windows. Such installations were impossible before. NOTE: I have not installed Google Chrome. It’s not needed anymore, since Netflix nowadays runs very well in Firefox. About the LXQt Desktop environment: LXQt is a lightweight Qt desktop environment. It will not get in your way. It will not hang or slow down your system. It is focused on being a classic desktop with a modern look and feel.

Quick install to Hard Drive
exGENT Linux can be installed to hard drive in 2 – 8 min. (Depending on computer type). This means that all of you who might hesitate to perform a normal Gentoo installation – which can take up to a couple of days – now have the chance to get this great Linux system (Gentoo) installed on your computers very easy. Read below on how the installation works.

UPGRADE the System
The exGENT System (version 180410) is in very good shape, since I, without problems, have been able to update the whole system with the following commands:

NOTE 1: Before running the above three commands you’ll have to run the commands emerge –sync followed by emerge —oneshot portage

NOTE 2: After a hard drive installation of exGENT you should run the above commands at least every month (to keep the system in good shape).

SPOTIFY
You can easy and quick install Spotify in exGENT. Just run the command emerge spotify. The installation takes about 1 min.
NOTE: Spotify is pre-installed in Build 180410.

Rolling distribution
Gentoo/exGENT is a rolling distribution, which implies that once you have installed the system on the hard drive there is no need for re-installations (which otherwise is common in the Linux world).