NEWS ABOUT LFA Build 220412
1. All packages the ordinary Linux user can wish for are pre-installed. Study the full packages list.
2. Kernel 5.17.2-amd64-exton (with Debian patches) is used. You can of course switch to Ubuntu’s original kernel if you prefer.
3. The Desktop environment is Gnome 42. (Ubuntu’s original DE).
4. The main Web Browser is Firefox. So you can watch Netflix!
5. I have included Refracta tools (Refracta Snapshot) to make it possible for you to create your own installable Ubuntu 22.04 Live DVD once you have installed LFA to hard drive.
6. You can run LFA fast in RAM. Use boot alternative 2 Load to RAM. The LFA ISO file is of only 1470 MB to be compared with Ubuntu’s original ISO of 2900 MB.
7. VirtualBox Guest Additions are pre-installed , which means (among other things) that you can run LFA in VirtualBox in full screen. Watch this screenshot. 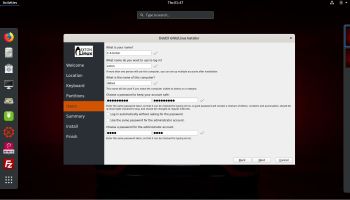 NEWS 190228 about DebEX Gnome – a Refracta efi Build
I have made a new extra version of DebEX, which I call DebEX Gnome Live DVD. It’s a pure Debian system using the testing (buster) and unstable (sid) repositories. Gnome 3.30 (latest) is used as Desktop environment. I have removed the Mate Desktop, since Gnome now can be used on all kind of computers. Also when running DebEX in VirtualBox and VMware. No need for Nvidia’s proprietary graphics drivers when running this new version of DebEX. You can of course install such drivers if you want to.Furthermore I have replaced Google Chrome with Iceweasel. It is now possible to watch Netflix movies using Iceweasel (Firefox) in Linux. I have also replaced Refracta Installer with Calamares Installer, which makes it possible to install DebEX Gnome in any language. You can even use Calamares in VirtualBox and VMware – i.e. non-efi computers. All installed packages have been updated to the latest version as of 190228.  DebEX Gnome uses kernel 5.0.0-rc7-exton corresponding Kernel.org’s second latest kernel 5.0-rc7.

The real McCoy
DebEX Gnome is a pure Debian system. I.e. no traces of Ubuntu, Kubuntu etc. New releases of Ubuntu are always based on Debian unstable. So is DebEX.