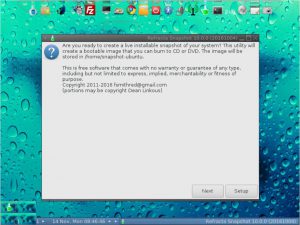 About Linux For All (LFA)
The system is based on Ubuntu 16.10, codenamed Yakkety Yak and Debian testing (Stretch – upcoming Debian 9). It’s a total rebuild. I.e. nothing is left of the old LFA system. All installed packages have been updated to the latest version as of 161114. Kernel 4.4.0-19-exton is replaced by kernel 4.8.0-27-exton. (4.8.0-27 is the latest Ubuntu kernel). You can download “my” kernel if you want to use it in another Ubuntu/Debian system. I have also installed Nvidia’s proprietary graphics driver 370.28. Most important: I have included Refracta Tools so you can create your own Linux For All/Ubuntu live installable system!

More news about LFA build 161114
One of my previous versions of LFA (build 141120) had four (4) Desktop environments installed. Namely Unity (Ubuntu), LXDE, Razor-qt and XBMC. LFA build 161114 uses only Fluxbox as Window Manager and Cairo-Dock as Desktop Interface. Cairo-Dock is designed to be light, fast and customizable, and is desktop-agnostic. It has a powerful DBus interface, to be controlled from a terminal or another application. Features can be added by plug-ins or applets, and applets can be written in C or in any language. About Fluxbox: Fluxbox is a Window Manager for X that was based on the Blackbox 0.61.1 code. It is very light on resources and easy to handle but yet full of features to make an easy, and extremely fast, desktop experience. So who needs KDE or Gnome?

Important about Refracta
You can use the Refracta tools (pre-installed in LFA Build 161114) to create your own installable Ubuntu Live DVD once you have installed LFA to hard drive. I mean change everything and then create a whole new Ubuntu 16.10 live system. When you start Refracta it will look like this. You don’t even have to install LFA to hard drive before you can use the Refracta tools. If you have plenty of RAM you can create a new (your own!) Ubuntu live installable system while running LFA from DVD or a USB stick. Please note that the whole Refracta process (creating your new ISO) will only take 5 – 10 min! You can then install VirtualBox in LFA so you can test run your own created new Ubuntu ISO. Or do it in Windows. By the way: You can do the whole thing in VirtualBox. I mean install LFA in VirtualBox, change everything, create a new Ubuntu 16.10 system using Refracta tools and transfer your new ISO to your server using FileZilla, which is pre-installed.