I have made a new version of ExTiX – The Ultimate Linux System. I call it ExTiX 16.1 LXQt Live DVD. (The previous version was 15.4).

ABOUT
ExTiX 16.1 LXQt DVD 64 bit is based on Debian 8.2 Jessie/Debian 9 Stretch and Ubuntu 15.10. The original system includes the Desktop Environment Unity (Ubuntu). After removing Unity I have installed LXQt 0.10.0. LXQt is the Qt port and the upcoming version of LXDE, the Lightweight Desktop Environment. It is the product of the merge between the LXDE-Qt and the Razor-qt projects: A lightweight, modular, blazing-fast and user-friendly desktop environment.

NEWS ABOUT ExTiX 16.1 build 160120 with LXQt Desktop environment
1. ExTiX LXQt is based on Ubuntu 15.10 Wily Werewolf. LXQt 0.10.0 (not in Ubuntu’s repositories) is used as Desktop environment. All packages have been updated to the latest version by 160120. Kernel 4.4.0-0-exton is used. (Kernel.org‘s kernel 4.4). Ubuntu 15.10 uses kernel 4.2.
2. Google Chrome is used as Web Browser, which makes it possible to watch Netflix movies. It is not possible in Firefox (in Linux).
3. I have also installed BlueGriffon Web Editor. BlueGriffon is a new WYSIWYG content editor for the World Wide Web. Powered by Gecko, the rendering engine of Firefox, it’s a modern and robust solution to edit Web pages in conformance to the latest Web Standards. Only to be compared with Dreamweaver. (In my opinion).
4. Other included important/useful packages are: LibreOffice, Thunderbird, GParted, Brasero, SMPlayer, GCC and other compilation tools so that you can install packages from source. Furthermore “all” multimedia codecs. Everything the average Linux user could wish for I would say.
5. I have also installed Nvidia Graphic driver 352.63 in the LXQt version. It has support for the following GPUs: Quadro K1200, Quadro M6000, GeForce 920M, GeForce 930A, GeForce 930M, GeForce 940M, GeForce GTX 950M, GeForce GTX 960M and GeForce GTX TITAN X. This driver will be used automatically if your card is supported.

WHAT’S SO SPECIAL about ExTiX and especially the new version from 160120?
1. The ExTiX ISO’s are ISO-hybrids, which means that they can very easily be transferred (copied) to a USB pen drive. You can even run ExTiX from the USB stick and save all your system changes on the stick. I.e. you will enjoy persistence!
2. Another big improvement is that both ExTiX versions can run from RAM. Use Boot alternative 3 (Copy to RAM). When the system has booted up you can remove the disc (DVD) or USB stick. You’ll need at least 2 GB RAM to run ExTiX that way. Running from RAM means that the system will run faster than from DVD or USB stick. Everything will be superfast I would say!
3. ExTiX LXQt is now more stable than ever. All packages have been upgraded to the latest version by 160120.
4. I’ve replaced kernel 4.2.0-16-exton with kernel 4.4.0-0-exton (Kernel.org‘s stable kernel 4.4).
5. The installation program Ubiquity (live installer) is now working as intended. I.e. a new user (your user) will be created during the installation process.

NEWS 151103 about Exton|OS Light Live DVD – ISO file of 838 MB
I’ve made a new extra version of Exton|OS based on Ubuntu 15.10 (alias Wily Werewolf) 64 bit with only a minimum of packages pre-installed. Among them a terminal emulator (LXTerminal), a Web Browser (Chromium), PCManFM (file manager), NetworkManager, GParted (Partition Editor), Samba (so you can reach your Windows computers) and Synaptic (Package Manager). I give you the pleasure of installing all extra packages you need after a hard disk installation of Exton|OS Light. Use Synaptic for that. You can of course also install new packages while running the system live (from DVD/USB stick), but nothing will be saved after a reboot. Unless you have followed my USB Install Instruction and used Boot alternative 2 – Persistent. If you have plenty of RAM you can even install big programs (such as LibreOffice) while running the system live even from CD. Exton|OS Light’s Window manager Openbox guarantees lightness and elegance.

Packages
All installed packages in Exton|OS Light have been updated to the latest available version as at November 3, 2015. Study the full package list.

NEWS 151027 ABOUT RaspEX
My first version of RaspEX is from 150318 and my second from 150706. I have now upgraded the whole system. RaspEX is a Linux ARM system for Raspberry Pi 2. It is based on Debian Jessie (Debian 8.1), Ubuntu Wily Werewolf (Ubuntu 15.10, released 151022) and Linaro (Open Source software for ARM SoCs). In this new version (151027) I’ve installed Wicd Network Manager and added support for Adobe Flash in Chromium (so you can watch YouTube). I have also installed Samba and VNC4Server so you can connect to your Windows computers in your Home Network and/or control RaspEX on your Raspberry Pi 2 from your Windows computers with VNC Viewer and/or PuTTY (Telnet and SSH client). Furthermore some extra Network Tools.

Why shall I use RaspEX?
Eight Operating Systems are recommended by Raspberrypi.org. Among them Noobs, Raspbian (Debian Wheezy) and Snappy Ubuntu Core. RaspEX is faster (“fast as lightning”), more useful and more fun to use. (In my opinion). One member on this site thought that running RaspEX was like running Raspberry on “steroids“. 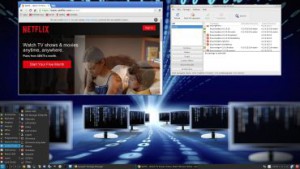 I have made two new versions of ExTiX – The Ultimate Linux System. I call them ExTiX 15.4 LXQt Live DVD respectively ExTiX 15.4 KDE Live DVD. (The previous version was 15.3).

ABOUT
ExTiX 15.4 LXQt/KDE Live DVD 64bit is based on Debian 8.2 Jessie/Ubuntu 15.10 Wily Werewolf. The original system includes the Desktop Environment Unity (Ubuntu). After removing Unity I have installed LXQt 0.9.0 respectively KDE Frameworks 5.15.0 with KDE 4.15. LXQt is the Qt port and the upcoming version of LXDE, the Lightweight Desktop Environment. It is the product of the merge between the LXDE-Qt and the Razor-qt projects: A lightweight, modular, blazing-fast and user-friendly desktop environment. 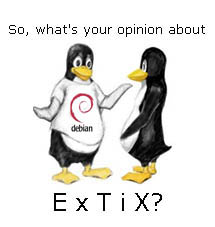