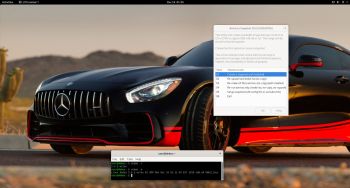 NEWS 191220 about DebEX Gnome
I had to replace yesterdays version of DebEX Gnome with version 191220. VirtualBox Guest Utils couldn’t be installed in yesterdays version. Something was wrong with the kernel configuration. I therefore had to compile a new kernel (5.4.4 – latest!) today. Now everything works also in VirtualBox. Another good thing with version 191220 of DebEX Gnome is that it can be installed without problems in VirtualBox. I.e. you don’t have to chroot into the install partition and install Grub – screenshot.

NEWS 191219 about DebEX Gnome – a Refracta UEFI Build
I have made a new extra version of DebEX, which I call DebEX Gnome Live DVD. It’s a pure Debian system using the testing (bullseye) and unstable (sid) repositories. Gnome 3.34 (latest) is used as Desktop environment. I have removed the Mate Desktop, since Gnome now can be used on all kind of computers. Also when running DebEX in VirtualBox and VMware. No need for Nvidia’s proprietary graphics drivers when running this new version of DebEX. You can of course install such drivers if you want to.Furthermore I have replaced Google Chrome with Iceweasel. It is now possible to watch Netflix movies using Iceweasel (Firefox) in Linux. I have also replaced Refracta Installer with Calamares Installer, which makes it possible to install DebEX Gnome in any language. You can even use Calamares in VirtualBox and VMware – i.e. non-efi computers. All installed packages have been updated to the latest version as of 191219.  DebEX Gnome uses kernel 5.4.3-exton corresponding Kernel.org’s second latest kernel 5.4.3.