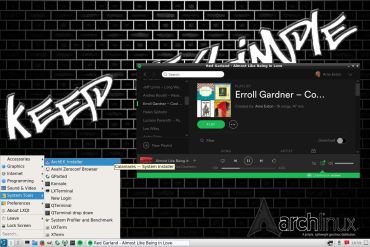 WHAT IS ArchEX?
ArchEX 64 bit is a new (170327) Linux live DVD based on Arch Linux. Arch motto is KISS (Keep It Simple Stupid). ArchEX uses kernel 4.10.5-1-ARCH and the LXQt Desktop environment. LXQt is a lightweight Qt desktop environment. It will not get in your way. It will not hang or slow down your system. It is focused on being a classic desktop with a modern look and feel.

What’s new in ArchEX Build 170327?
I’ve installed Calamares, which is a distribution-independent system installer, with an advanced partitioning feature for both manual and automated partitioning operations. It is the first installer with an automated “Replace Partition” option, which makes it easy to reuse a partition over and over for distribution testing. Calamares works almost perfect in ArchEX. Read more about it. I’ve also added Yaourt – a Pacman frontend. If you want to install certain special packages for example Google Chrome and Spotify you must use Yaourt. Note: Spotify is pre-installed in ArchEX Build 170327.

INSTALLED SOFTWARE
Among many other programs, Firefox, Gimp, GCC, Wicd and GParted – study this package LIST.

INSTALLATION to hard drive
ArchEX can easily be installed to hard drive of those who so desire. Use ArchEX Installer (Calamares). I.e. while running ArchEX live from a DVD or USB stick. Read this INSTRUCTION and watch the slideshow below.

WHO should run Arch Linux?
My answer: The system fits the “advanced” Linux user/enthusiast, who would be willing to run an occasional command from time to time.

LFS EXTON – a live installable Linux system built from Linux From Scratch (which can run on ALL computers) with kernel 6.0.6-amd64-exton ::: Build 221103 LFS EXTON Linux live DVD/USB is built using Linux From Scratch 10.1/11.2 and Beyond Linux From Scratch 10.1/11.2 (BLFS), which has the latest Linux packages and scripts.NEWS 221103A new version of LFS EXTON is ready! The first version is from 210706. Most important news re. the new version:1. LFS EXTON Build 221103 runs on ALL computers. I. e. new and old ones. UEFI or non-UEFI computers. (Build 210706 was not compatible with some newer computers).2. Build 221103 uses the latest kernel 6.0.6, released 221029.The kernel is named 6.0.6-amd64-exton-rt14.3. I have upgraded some essential packages. Most important Firefox.4. I have installed two new packages: Gnu Emacs (“At its core is an interpreter for Emacs Lisp, a dialect of the Lisp programming language with extensions to support text editing”) and MPlayer (a movie player).5. You can download the kernel-sources for LFS EXTON from SourceForge.net – linux-source-6.0.zip. Can be used if you want to install (for example) NVIDIA Graphics Drivers. Unpack and place the sources in /usr/src.ABOUT Refracta InstallerI finally made Refracta Installer to work in LFS EXTON! Now you can install LFS EXTON to hard drive like any other Linux distribution. Just start Refracta Installer from the menu and follow the instructions.LXDE and LightDMLFS EXTON uses LXDE as Desktop environment. "LXDE is designed to be user friendly and slim, while keeping the resource usage low". LFS EXTON has all the tools needed for you to go on and install other Desktop environments or whatever you like (after a hard drive installation of LFS EXTON).BUILD YOU OWN Linux systemYou can also just use LFS EXTON Live DVD/USB as build environment when building your own Linux system from scratch.SCREENSHOTS1. The ordinary user lfs Desktop: www.exton.se/lfs-exton/lfs-exton-lfs-desktop-221103.jpg2. root’s Desktop: www.exton.se/lfs-exton/lfs-exton-root-desktop-221103.jpg3. Showing how to mount NTFS partitions: www.exton.se/lfs-exton/lfs-exton-mount-ntfs-221103.jpg4. Running Netflix in Firefox: www.exton.se/lfs-exton/lfs-exton-netflix-running-221103.jpgREAD MORE: www.exton.se/lfs-exton-a-live-installable-linux-system-built-from-linux-from-scratch-which-can-ru... ... See MoreSee Less

CruxEX 3.7 live system (based on CRUX 3.7, released 220926) with LXDE and kernel 6.0.6-aufs-exton :: Build 221031CruxEX 2022 64 bit Linux Live USB is based on CRUX 3.7 (latest version, released 220926), which is all Linux enthusiasts/nerds favorite OS. ("CRUX is a lightweight Linux distribution for the x86_64 architecture targeted at experienced Linux users. The primary focus of this distribution is keep it simple, which is reflected in a straightforward tar.gz-based package system, BSD-style initscripts, and a relatively small collection of trimmed packages. The secondary focus is utilization of new Linux features and recent tools and libraries. CRUX also has a ports system which makes it easy to install and upgrade applications"). CruxEX 3.7 2022 uses the LXDE Desktop environment. I have replaced the original CRUX kernel 5.15 with “my” special kernel 6.0.6-aufs-exton, with support for “extra everything”.UNIQUECruxEX 3.7 2022 build 221031 is – as my previous CRUX-remasters – unique in the world. I.e. there is no other CRUX Live CD/USB (as far as I know). In any case, not for downloading. The good thing with CruxEX is that it is a live system (which CRUX original isn’t) and that you can run CruxEX super fast from RAM. Also that you can install CruxEX to hard drive in about 5 minutes and then have a ready-to-go CRUX desktop system. You can after that install any (extra) desktop environment you like. NOTE: You can (of course) install new Desktops environments and other stuff also when running CruxEX from a USB stick – PERSISTENCE! Note also: To make CRUX original ready for everyday use will normally take 2 – 3 days!SCREENSHOTS1. The LXDE Desktop for the live user: cruxex.exton.net/cruxex-3.7-live-desktop.jpg2. The LXDE Desktop for root: cruxex.exton.net/cruxex-3.7-root-desktop.jpg3. Netflix running in Google Chrome: cruxex.exton.net/cruxex-3.7-netflix.jpg4. Spotify Web Player is running in Google Chrome: cruxex.exton.net/cruxex-3.7-spotify.jpgStudy ALL installed packages: cruxex.exton.net/cruxex-3.7-installed-packages-221031.txtREAD MORE: cruxex.exton.net/ ... See MoreSee Less