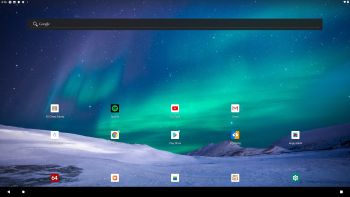 NEWS 200108 about AndEX 10 with GAPPS
My first build of AndEX 10 is ready. It has GAPPS (Google Play Store etc), Aptoide App Manager, F-Droid, Spotify, Angry Birds and many other apps pre-installed. My new build of Android x86_64 10 – andex-10-x86_64-gapps-fdroid-aptoide-chrome-1240mb-200108.iso can be installed to hard drive or on a USB stick. You can also run the system live. I.e. from a DVD or a USB stick. On some computers you’ll have to start up AndEX 10 in compatibility mode (VESA) though. The sound and video performance is generally very very good. Google Play Store works very well in this build of AndEX 10. So does the YouTube and Spotify app. I’ve also included two extra app stores – Aptoide App Manager and F-Droid. Use them if you can’t find the app you’re looking for using Google Play Store.

Screenshot – AndEX 10 Build 200108 – the Desktop with many nice apps installed. The apps Facebook, Opera, Fishing Clash, Clash of Clans and CSR Racing 2 are not preinstalled, but they run very well in this AndEX build. Just go to Google Play and install them! (Once you have installed AndEX 10 to hard drive).

MORE ABOUT AndEX 10
My new compiled Android-x86_64 system (10) can run and be installed on almost all newer laptops (and some Desktop computers). For example Acer (Aspire), HP, Samsung, Dell, Toshiba, Lenovo, Thinkpad, Fujitsu, Panasonic and Asus laptops. You can also run AndEX 10 in VirtualBox and/or VMware. Unfortunately with bad video performance and distorted colors – screenshot. I can also mention that I could run my new 10 version on a HP Pavilion 500-317no Desktop Computer and on a Lenovo ThinkStation C30. Also with bad video performance and distorted colors. You can very easy do a “normal” or manual installation to hard drive. A manual installation can also be done to a drive where you already have another Linux system (for example Ubuntu 19.10) installed. Read more about how to install AndEX 10 on the INFO site.

UNIQUE
As far as I know there is no other Android-x86_64 10 system out there. At least not with GAPPS included.

andex.exton.net – latest is AndEX 10 (with GAPPS) and AndEX Pie 9.0  (also with GAPPS)!
and
about my Pie, Oreo, Nougat, Marshmallow and Lollipop versions for Raspberry Pi 3/2 at
raspex.exton.se – latest is RaspAnd Pie 9.0 (without GAPPS) and RaspAnd Oreo 8.1 (with GAPPS)!