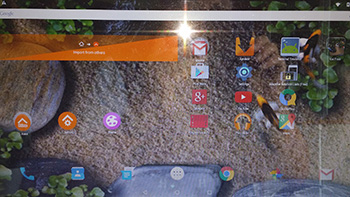 About AndEX
My compiled Android–x86 system (Lollipop 5.0.2) can run live (from CD or a USB stick) or be installed on almost all laptops (and some Desktop computers). For example Acer (Aspire), HP, Samsung, Dell, Toshiba, Lenovo, Thinkpad, Fujitsu, Panasonic and Asus laptops. The Android system is distributed in the form of an ISO file as the rest of my Linux distributions. I.e. you must (as usual) burn the ISO file to a CD (DVD) if you want to run the system live on your computer or install it to hard drive. Read about how to burn ISO files. Or skip that. Just use ImgBurn. Nothing can go wrong.

More about AndEX
Lollipop 5.0.2 is the second latest version of the Android mobile operating system developed by Google. I call my remaster of it AndEX Lollipop Live DVD. It uses “my” special kernel 4.0.0-exton-android-x86 with some extra features. I.e. extra drivers and NTFS read/write support. My Android-x86 KitKat 4.4.4 build from 2015-05-04 will also cost you 9 $. It has one advantage over the Lollipop version: You can run the system in VirtualBox. Read more about the KitKat 4.4.4 version 150504 or DOWNLOAD it instantly.

Installing new apps in AndEX Lollipop
Use Google Play Store or Aptoide App Manager, which are pre-installed. Just make your choices. Normally you should always use Google Play Store, but if you can’t find the app you are looking for you can try Aptoide.

USB installation
Read my instruction. Learn how you can run AndEX from a USB stick with persistence. Read under A).

VirtualBox
Unfortunately you cannot (normally) run/test the system in VirtualBox. I.e. run it directly from the ISO file and install it to a hard drive created in VirtualBox. That can however be done if you use one of my other Android remaster KitKat 4.4.4 version 150504.

NOTE2/WARNING2
Before you buy and download this version of AndEX you must be aware of that not all apps downloaded from Google Play Store can run in an Android-x86 system. Some very big (around 1GB) games for example won’t run. Note about version 150520: While running The Absolute Ultimate Edition you won’t get any error messages.