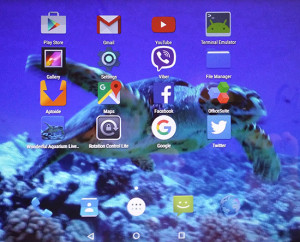 I just want to share that I have “discovered” that Skype and Viber can be installed and used without problems in “my” Android x86 system KitKat Build 7 from 150721. These are pretty awesome apps, wouldn’t you agree?

Screenshot of the Desktop with Skype and Viber icons