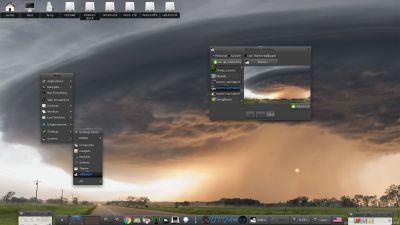 WHAT’S NEW IN VERSION 160612?
1. ExLight is now based on Ubuntu 16.04 (alias Xenial Xerus) and Debian 8.5 Jessie.
2. I have upgraded the Desktop environment Enlightenment (Beauty at your fingertips) to version 0.20.99.0 (from 0.19.12).
3. I have replaced kernel 4.2.0-16-exton with kernel 4.6.2-exlight.
4. ExLight’s ISO file is now a ISO-hybrid, which means that it can very easily be transferred (copied) to a USB pen drive. You can then even run ExLight from the USB stick and save all your system changes on the stick. I.e. you will enjoy persistence!
5. Another big improvement is that ExLight can run from RAM. Use Boot alternative 3 (Copy to RAM). When the system has booted up you can remove the disc (DVD) or USB stick. You’ll need at least 2 GB RAM to run ExLight that way.
6. The installation program Ubiquity (live installer) is now working as intended in ExLight version 160612. I.e. a new user (your user) will be created during the installation process.
7. I have pre-installed Nvidia proprietary Graphics driver 361.45.11.
8. I have added three animated wallpapers.

Installed packages
The Desktop Environment is Enlightenment 0.20.99.0 (Beauty at your fingertips). Kernel 4.6.2-exlight is used. (Kernel.org‘s latest stable kernel 4.6.2). Program content: Libre Office, Synaptic, GParted, Wicd, PCManFM, Google Chrome (for watching Netflix movies) and Gimp. Furthermore compilation tools so that you can install programs from source. I have also included Nvidia Graphics driver 361.45.11. It has support for the following GPUs (among others): GeForce 900, GeForce 800A, GeForce 800M, GeForce 700, Quadro Series, GeForce GTX 970M and GeForce GTX 980M. Study the full ExLight program LIST. All programs have been updated to the latest available version as at June 12, 2016.