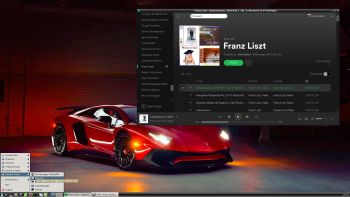 CruxEX 3.4 64 bit Linux Live USB is based on CRUX 3.4 (latest version, released 180512), which is all Linux enthusiasts/nerds favorite OS. (CRUX is a lightweight Linux distribution for the x86_64 architecture targeted at experienced Linux users. The primary focus of this distribution is keep it simple, which is reflected in a straightforward tar.gz-based package system, BSD-style initscripts, and a relatively small collection of trimmed packages. The secondary focus is utilization of new Linux features and recent tools and libraries. CRUX also has a ports system which makes it easy to install and upgrade applications). CruxEX 3.4 2018 uses the LXDE Desktop environment. I have replaced the original CRUX kernel 4.14.20 with “my” special kernel 4.18.7-exton, with support for “extra everything”.

NEWS 180912
CruxEX 2018 is distributed only as a Zip file. Install my new version of CruxEX 3.4 64bit from 180912 to a USB Pen Drive and run the system superfast from RAM – read this INSTRUCTION. If you later on decide you want to install CruxEX to hard drive from the USB Pen Drive all your system changes will also be installed to the hard drive. NOTE: Unfortunately persistence can’t be enabled anymore while running CruxEX from a USB stick.

About CruxEX 3.4 version 180912
All packages have been upgraded to the latest available version (with prt-get sysup). Furthermore: This version uses kernel 4.18.7 released 180909! And of course Google Chrome for Netflix!

Unique
CruxEX 3.4 2018 build 180912 is – as my previous CRUX-remasters – unique in the world. I.e. there is no other CRUX Live CD/USB (as far as I know). In any case, not for downloading. The good thing with CruxEX is that it is a live system (which CRUX original isn’t) and that you can run CruxEX superfast from RAM. Also that you can install CruxEX to hard drive in about 5 min and then have a ready-to-go CRUX desktop system. You can after that install any (extra) desktop environment you like.