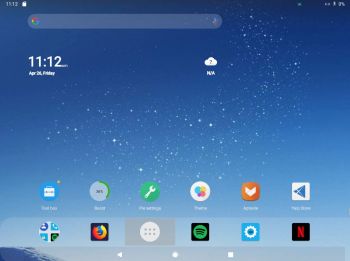 NEWS 190426 about a new extra version of AndEX Pie 9.0
My new build of Android x86_64 – andex-x86_64-pie-9.0-aptoide-netflix-spotify-1610mb-190426.iso can be installed to hard drive or on a USB stick. You can also run the system live. I.e. from a DVD or a USB stick. On some computers you’ll have to start up AndEX 9.0 in compatibility mode (VESA) though. The sound and video performance is generally very very good. Yalp Store and Aptoide App Manager work very well in this build of AndEX Pie. So does the Netflix and Spotify app. I have unfortunately not been able to install Google Play Store and other GAPPS. Yalp Store and Aptoide work as good replacements for Google Play Store though. This new version of AndEX Pie (build 190426) runs somewhat faster and is a bit more responsive than the “old” version (build 190326) of AndEX Pie. It also runs very well live in VirtualBox and VMware. The new version looks better too since it uses Pie Launcher as Desktop environment.

About Yalp Store
Yalp Store lets you download apps directly from Google Play Store as apk files. It can search for updates of installed apps and lets you search for other apps. The point of Yalp Store is to be small and independent from Google Services Framework. By default Yalp Store connects to Google services using a built-in account, so you do not have to own a Google account to use it. The only reason to use a live Google account is to access the paid apps you own or leave reviews. So Yalp Store works as a pretty good replacement for Google Play Store. I think.

MORE ABOUT AndEX Pie
My new compiled Android-x86_64 system (Pie 9.0) can run and be installed on almost all newer laptops (and some Desktop computers). For example Acer (Aspire), HP, Samsung, Dell, Toshiba, Lenovo, Thinkpad, Fujitsu, Panasonic and Asus laptops. You can (of course) also run AndEX in VirtualBox and/or VMware. I can also mention that I could run my new Pie version without problems on a HP Pavilion 500-317no Desktop Computer. You can very easy do a manual installation to hard drive. That can also be done to a drive where you already have another Linux system (for example Ubuntu 19.04) installed. Read more about how to install AndEX Pie at the main site about AndEX Pie.

SCREENSHOTS showing the new AndEX Pie Desktop etc
1. First screen after boot
2. Screen after Pie Launcher is configured
3. The Desktop is ready
4. Showing all pre-installed apps
5. Yalp Store categories
6. Examples of games which can be installed via Yalp Store