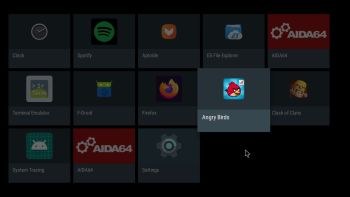 About Raspberry Pi 4
This build (RaspAnd 10 200809) works very well on the new Raspberry Pi 4. I used the latest model with 8GB RAM, but you can of course use the other models too.

ABOUT RaspAnd 10 – Build 200809
RaspAnd 10 runs very well on a Raspberry Pi 4, 3 Model B and 3 Model B+. I.e. the system is pretty responsive if you use a micro SD card of good quality. RaspAnd 10 has the following apps pre-installed: Firefox, Spotify, Aptoide App Manager, F-Droid, Aida64 and ES File Explorer. Unfortunately not Google Play Store, but Aptoide and F-Droid work as good replacements for it.

About different launchers
If you install Lucid Launcher via Aptoide App Manager you can change wallpaper to whatever you want. Watch a screenshot when Lucid Launcher is used…

Compatibility :: August 2020
Unfortunately not all systems made for Raspberry Pi 3 and 2 will run on the new Raspberry Pi 4 computer. They need to be upgraded with a new kernel. I therefore have to upgrade the systems I distribute. I.e. RaspEX, RaspEX with OpenCPN, exGENT, RaspEX BunsenLabs, RaspEX Kodi, RaspAnd Marshmallow, RaspAnd Nougat 7.1.2, RaspAnd Oreo 8.1, RaspAnd Pie, EXTON OpSuS Rpi, FedEX Rpi3 and RaspArch. I have until now (200809) only upgraded RaspAnd 10, RaspEX, RaspEX Kodi, RaspArch, exGENT and RaspEX with OpenCPN. Read about the new Raspberry Pi 4.