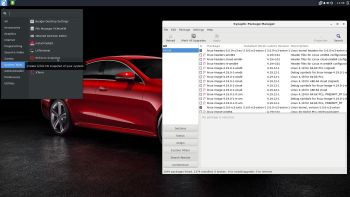 NEWS 190128 about DebEX Budgie – a Refracta Build
A new version of DebEX Barebone with Budgie Desktop 10.4 and kernel 5.0.0-rc3-exton (equivalent to Kernel.org’s second latest kernel 5.0-rc3) is ready. All packages have been updated to the latest version as of January 28, 2019. DebEX Barebone is now based on Debian Buster (upcoming Debian 10). Most important: The ISO has decreased from 1330 MB to 925 MB, which makes it easier to run the system live from RAM. That ability allows DebEX Budgie to be very fast, since reading and writing data from/to RAM is much faster than on a hard disk drive. You can use the Calamares 3.2.3-2 Installer Framework to install DebEX Budgie to your computer in any language. You can even use Calamares in VirtualBox and VMware – i.e. non-efi computers. Watch this animated GIF.

The real McCoy
DebEX is a pure Debian system. I.e. no traces of Ubuntu, Kubuntu etc. New releases of Ubuntu are always based on Debian unstable. So is DebEX.

Important about Refracta
You can use the Refracta Snaphot (pre-installed in all three versions of DebEX) to create your own installable Debian Live DVD once you have installed DebEX to hard drive. I mean change everything and then create a whole new Debian live system. When you start Refracta it will look like this. You don’t even have to install DebEX to hard drive before you can use the Refracta tools. If you have plenty of RAM you can create a new (your own!) Debian system while running DebEX from DVD or a USB stick. Please note that the whole Refracta process (creating your new ISO) will only take 10 – 50 min! You’ll find your ISO in /home/snapshot.

Spotify
You can easily install Spotify in DebEX (even while running the system live). Just run the command sudo apt update followed by sudo apt install spotify-client. Watch a screenshot when Spotify is running in DebEX Budgie.

Rolling distribution
Debian/DebEX are rolling distributions, which implies that once you have installed the system on the hard drive there is no need for re-installations (which otherwise is common in the Linux world). This means, for example, that you can go on and install Gnome or/and KDE in DebEX Budgie.