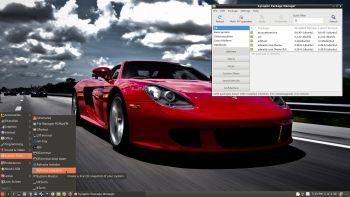 ABOUT
ExTiX 18.4 LXQt DVD 64 bit is based on Debian 9 Stretch and Ubuntu 18.04 Bionic Beaver, to be released 180426. The original system includes the Desktop Environment Gnome. After removing Gnome I have installed LXQt 0.12.0. LXQt is the Qt port and the upcoming version of LXDE, the Lightweight Desktop Environment. It is the product of the merge between the LXDE-Qt and the Razor-qt projects: A lightweight, modular, blazing-fast and user-friendly desktop environment.

NEWS ABOUT ExTiX 18.4 Build 180419 with the LXQt Desktop environment
1. ExTiX LXQt is based on Ubuntu 18.04 Bionic Beaver. LXQt 0.12.0 is used as Desktop environment. All packages have been updated to the latest version by 180419. Kernel 4.16.2-exton is used. (Kernel.org‘s kernel 4.16.2).
2. Firefox has replaced Google Chrome as Web Browser. It’s now possible to watch Netflix movies also in Firefox (while running Linux).
3. I have replaced Ubuntu’s installer Ubiquity with Calamares Installer. Calamares is an installer framework. By design it is very customizable, in order to satisfy a wide variety of needs and use cases.
4. Other included important/useful packages are: LibreOffice, Thunderbird, GParted, Brasero, SMPlayer, GCC and other compilation tools so that you can install packages from source. Furthermore “all” multimedia codecs. Everything the average Linux user could wish for I would say.

Refracta Tools
While running ExTiX LXQt 18.4 live or from hard drive you can use Refracta tools (pre-installed) to create your own live installable Ubuntu system. A ten year child can do it!

THE IMPORTANCE of ExTiX LXQt now being based on Ubuntu 18.04 (UNSTABLE/DEVELOPMENT)
I don’t think it is too important since ExTiX LXQt doesn’t use complicated Desktop Environments like KDE, Gnome or Unity. Programs won’t crash or anything like that. And I haven’t discovered any bugs to report. Besides the FinalFreeze of upcoming Ubuntu 18.04 is today (180419).

about my Nougat, Marshmallow and Lollipop versions for Raspberry Pi 3/2 at
raspex.exton.se – latest is RaspAnd Nougat 7.1.2!