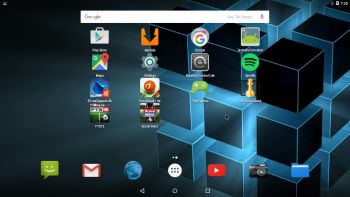 MORE NEWS 160215
My new build of Android-x86 Lollipop 5.1.1 has GAPPS pre-installed. I.e. Google Play Services, Google Play Store, Maps, YouTube and more apps. The ISO is called android-x86-lollipop-5.1.1-exton-kernel4.4-mesa-507mb-160215.iso. AndEX 160215 is totally error-free. For installing new apps you shall always use Google Play Store in AndEX Build 160215. Only use Aptoide App Manager (which is also pre-installed) if you can’t find the app you are searching for in Google Play Store.

About AndEX
My compiled Android–x86 system (Lollipop 5.1.1) can run live (from CD or a USB stick) or be installed on almost all laptops (and some Desktop computers). For example Acer (Aspire), HP, Samsung, Dell, Toshiba, Lenovo, Thinkpad, Fujitsu, Panasonic and Asus laptops. I can also mention that I could run this version without problems on a HP Pavilion 500 Desktop Computer. The Android system is distributed in the form of an ISO file as the rest of my Linux distributions.

Upgrade/Updates
This build of AndEX (160215) replaces Build 151010. No need to upgrade if you already have a working version of Build 151010 installed. All installed apps (GAPPS and others) will then be in the same version as in build 160215 of AndEX. I.e. if you install Andriod-x86 to hard drive or to a USB stick with persistence all installed apps will be automatically updated/upgraded via Google Play Store. The system will check for updates all the time or after a reboot. It works in the same way as on your Android phone. If, however, you need or want this new version (with a newer kernel) you can contact me so I can send you a download link. Please then show your receipt for AndEX Lollipop Build 151010 or 150916.

What’s the point?
Well, if you like your Android phone and all the apps you have installed on it I’m sure you will also like to run apps from your laptop. Bigger screen and better sound etc. Also: In AndEX version 160215 almost all apps and games can be installed via Google Play Store. Still not convinced? Then read my article about “How useful an Androx-x86 system can be for the average computer user“.