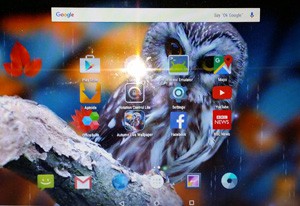 More about AndEX
Lollipop 5.1.1 is the latest version of the Android mobile operating system developed by Google. I call my remaster of it AndEX Lollipop Live CD. It uses “my” special kernel 4.0.8-exton-android-x86 with some extra features. I.e. extra drivers. My Android-x86 KitKat 4.4.4 build from 2015-07-21 will also cost you 9 $. I has two advantages over the Lollipop version: You can run the system in VirtualBox and the system can be used also on older laptops. Read more about the KitKat 4.4.4 version 150721 or DOWNLOAD it instantly.

Upgrade?
This build of AndEX (150916) replaces Build 150611. No need to upgrade if you already have a working version of build 150611 installed. All installed apps (GAPPS and others) will then be in the same version as in build 150916 of AndEX. I.e. the system will check for updates all the time or after a reboot. It works in the same way as on your Android phone.