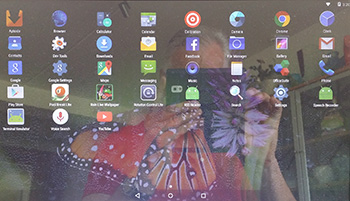 NEWS 150611 – AndEX – Lollipop 5.1.1 with kernel 4.0.3 and GAPPS
My new build of Android-x86 Lollipop 5.1.1 has GAPPS pre-installed. I.e. Google Play Services, Google Play Store, Maps, YouTube and more apps. For example: Facebook, OfficeSuite 8 and Pool Break Lite (3D game). The ISO is called android-x86-5.1.1-lollipop-kernel-4.0.3-exton-GAPPS-556mb-150611.iso. AndEX 150611 is totally error-free. (This Lollipop version was released April 27, 2015). When running AndEX live you will get some error messages during the setup of your wireless connection and logging into your Google account, but nothing serious. For installing new apps you shall always use Google Play Store in AndEX build 150611. Only use Aptoide App Manager (which is also pre-installed) if you can’t find the app you are searching for in Google Play Store.

More about AndEX
Lollipop 5.1.1 is the latest version of the Android mobile operating system developed by Google. I call my remaster of it AndEX Lollipop Live CD. It uses “my” special kernel 4.0.3-exton-android-x86 with some extra features. I.e. extra drivers. My Android-x86 KitKat 4.4.4 build from 2015-06-06 will also cost you 9 $. I has two advantages over the Lollipop version: You can run the system in VirtualBox and the system can be used also on older laptops. Read more about the KitKat 4.4.4 version 150606 or DOWNLOAD it instantly.

Installing 3D games
I wrote an article 150608 about installing 3D games in my KitKat 4.4.4 Build 6. The same games can be installed in AndEX Build 150611. I have also tested Cars: Fast as Lightning and Trials Frontier in AndEX. Those apps ran without problems.

What’s the point?
Well, if you like your Android phone and all the apps you have installed on it I’m sure you will also like to run apps from your laptop. Bigger screen and better sound etc. Also: In AndEX version 150611 almost all apps and games can be installed via Google Play Store. Still not convinced? Then read my article about “How useful an Androx-x86 system can be for the average computer user“.