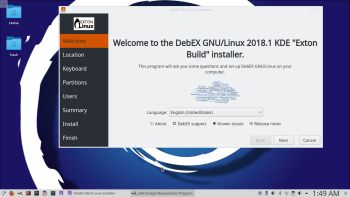 NEWS 171203 about DebEX KDE Plasma – a Refracta Build
I have made a new version of DebEX KDE Plasma Live DVD. It replaces version 171023. It’s a pure Debian 10 system. (Buster/Sid). I.e.: There are no Ubuntu or Kubuntu elements involved. DebEX KDE Plasma uses KDE 4.16 and KDE Plasma Desktop 5:37 as Desktop environment. It uses kernel 4.13.0-16-exton – (4.13.4). I have replaced Wicd with NetworkManager. It works better. I have installed Nvidia’s proprietary graphic driver 384.90. I have replaced Google Chrome with Firefox 57.0 (for Netflix). I’ve also added SMPlayer – an alternative to Vlc. (SMPlayer is a free media player for Windows and Linux with built-in codecs that can play virtually all video and audio formats. It doesn’t need any external codecs. Just install SMPlayer and you’ll be able to play all formats without the hassle to find and install codec packs). All other installed packages have also been updated to the latest version of 171203. Study the full package list. MOST IMPORTANT CHANGE: I have replaced Refracta Installer with Calamares 3.1.9 Installer Framework. Now you can choose language when the installation starts. When it’s ready everything will be in your chosen language! Log in to KDE as the ordinary user user with password live or as root (superuser) with password root.

About Calamares
I’ve installed Calamares in ArchEX (Arch Linux) Build 171129. It works extremely well. So I thought why not install Calamares also in DebEX?  Watch a YouTube video about running Calamares in ArchEX. Calamares works in the same way in DebEX.  What is Calamares?  – Calamares is an installer framework. By design it is very customizable, in order to satisfy a wide variety of needs and use cases. Calamares aims to be easy, usable, beautiful, pragmatic, inclusive and distribution-agnostic. Calamares includes an advanced partitioning feature, with support for both manual and automated partitioning operations. It is the first installer with an automated “Replace Partition” option, which makes it easy to reuse a partition over and over for distribution testing.

Important about Refracta
You can use the Refracta snapshot (pre-installed in all three versions of DebEX) to create your own installable Debian Live DVD once you have installed DebEX to hard drive. I mean change everything and then create a whole new Debian live system. When you start Refracta it will look like this. You don’t even have to install DebEX to hard drive before you can use the Refracta tools. If you have plenty of RAM you can create a new (your own!) Debian 10 system while running DebEX from DVD or a USB stick. Please note that the whole Refracta process (creating your new ISO) will only take 10 – 50 min! You’ll find the ISO in /home/snapshots. Or change that by editing /etc/refractasnapshot.conf.