Important about Refracta
You can use the Refracta Tools (pre-installed in ExTiX 17.5) to create your own installable Ubuntu 17.04 Live DVD once you have installed ExTiX to hard drive. I mean change everything and then create a whole new Ubuntu live system. Start Refracta from Menu >> System >> Create a live CD snapshot of your system. You don’t even have to install ExTiX to hard drive before you can use the Refracta tools. If you have plenty of RAM you can create a new (your own!) Ubuntu system while running ExTiX from DVD or a USB stick. Please note that the whole Refracta process (creating your new ISO) will only take 5 – 10 min! You’ll find the ISO in /home/snapshots. The whole thing is very simple. Watch a sideshow below about how to use Refracta Tools. I.e. create a snapshot of your ExTiX/Ubuntu system. 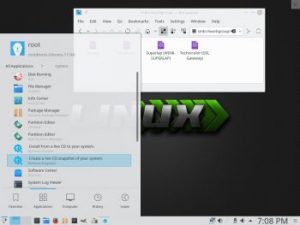 I have made a new version of ExTiX – The Ultimate Linux System. I call it ExTiX 17.5 KDE Live DVD. (The previous version was 17.0 from 161221). The best thing with ExTiX 17.5 is that while running the system live (from DVD/USB) or from hard drive you can use Refracta Tools (pre-installed) to create your own live installable Ubuntu system. So easy that a ten year child can do it!

ABOUT
ExTiX 17.5 KDE DVD 64 bit is based on Debian 8.7 Jessie/Debian 9 Stretch and Ubuntu 17.04. The original system includes the Desktop Environment Unity (Ubuntu). After removing Unity I have installed KDE Frameworks 5.31.0 with KDE 4.16.12. KDE Frameworks are 60 addon libraries to Qt which provide a wide variety of commonly needed functionality in mature, peer reviewed and well tested libraries with friendly licensing terms.

NEWS ABOUT ExTiX 17.5 Build 170508 with the KDE Desktop environment and Refracta Tools
1. ExTiX KDE is based on Ubuntu 17.04 Zesty Zapus. KDE 4.16.12 is used as Desktop environment. All packages have been updated to the latest version by 170508. Kernel 4.11.0-1-exton is used. (Kernel.org‘s kernel 4.11-rc8).
2. I have removed Google Chrome. It is now possible to watch Netflix movies in Firefox.
3. I have installed BlueGriffon Web Editor. BlueGriffon is a new WYSIWYG content editor for the World Wide Web. Powered by Gecko, the rendering engine of Firefox, it’s a modern and robust solution to edit Web pages in conformance to the latest Web Standards. Only to be compared with Dreamweaver. (In my opinion).
4. Other included important/useful packages are: LibreOffice, Thunderbird, GParted, Brasero, SMPlayer, GCC and other compilation tools so that you can install packages from source. Furthermore “all” multimedia codecs. Everything the average Linux user could wish for I would say.
5. The best thing with ExTiX 17.5 is that while running the system live (from DVD/USB) or from hard drive you can use Refracta Tools (pre-installed) to create your own live installable Ubuntu system. Very easy to do.